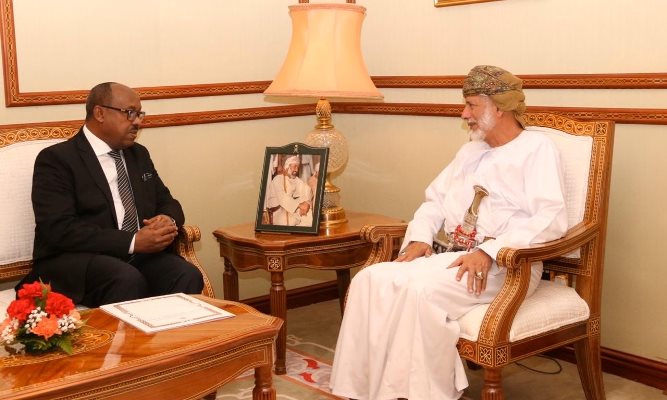 Addis Ababa, January 20, 2020 (FBC) –President Sahle-Work Zewde and Prime Minister Dr Abiy Ahmed have sent a message of condolence to the people of Oman on the demise of the late Qaboos bin Said Al Said, Sultan of the Sultanate of Oman.

Amb Mohammed Dirir, advisor to the Ethiopian Minister of Foreign Affairs, handed over the message addressed to Sultan Haitam Bin Tariq Bin Taimour, the Sultan of the Sultanate of Oman, to Yusuf bin Alawi bin Abdullah, the Minister Responsible for Foreign Affairs.

Amb Mohammed has conveyed the messages expressing the heart-felt condolences to Sultan Haitam, the family and all the people of Oman and extended sympathy on behalf of the Ethiopian government and the people on the demise of the greatly missed Sultan.

Amb Mohammed also delivered a written congratulatory message from President Sahle-Work Zewde to Sultan Haitam on his succession as the sultan of the Sultanate of Oman.

Expressing gratitude for the messages of condolence, Yusuf bin Alawi noted that whilst relation between the two countries are growing, there are many issues in which both countries should work more effectively to scale up the relation.

Amb Mohammed Dirir and Yusuf bin Alawi further discussed on ways to continue and strengthen the relation between Ethiopia and Oman in various areas and expressed their governments’ commitment in bolstering the ties.